Ian Eckert on charging for content, and the ‘year of the paywall’

After all the prognostication and pronouncements in the dying days of the last decade, 2010 looks set to be the year when the payment walls go up in the world of online publishing.

Some have argued that this debate has a distinct feel of traditional print publishers circling the wagons in a forlorn attempt to stop the advance of the web’s so-called freeconomists — those who believe unfettered access to high quality content is the inalienable right of all web users.

Arguments on the other side of the debate are scarcely more measured, with the likes of Rupert Murdoch and his acolytes routinely talking of content kleptomaniacs, digital vampires and parasites.

But behind all this hyperbole there are some stark economic facts. Much of the print publishing industry is seeing ad revenues haemorrhage. In the US, 11 print media companies from Advertising Age’s Top 100 filed for bankruptcy in 2009, a list that included iconic names such as Chicago Sun-Times. This is in part due to the extraordinary economic conditions currently prevailing. But the consequences of the credit crunch alone cannot explain the seismic shift that publishers are struggling to control.

Rupert Murdoch’s hypothesis is that publishers were ‘asleep’ and made a huge mistake in giving everything away for free online only to find that the hoped-for advertising revenues that were to finance this largess failed to materialise. In the meantime, quality content providers became devalued and ended up fighting in the gutter for the scraps of online ad revenue not already hoovered up by the search giants. And this is not sustainable. Or in Murdoch’s words: “There is not enough advertising in the world to go around to make all the [publishing] websites profitable”.

One thing seems certain. Print publishing’s display and classified ad revenues are unlikely to bounce back to pre-recession levels regardless of the delivery medium. So there has to be an alternative model that can fund the costly business of producing quality content.

Of course it’s a generalisation to assume that all publishers have been giving their content away for free up to this point. In the B2B markets in which Abacus specialise, we’ve always had clients such as Thomson Reuters who’ve been able to charge for high-quality editorial content. But the key to charging is the uniqueness or proprietary nature of the content or service being provided.

So the recent announcement from the Financial Times that it expects content revenue (including print subscriptions and online access fees) to exceed print advertising revenues for the first time this year is no great surprise in a market where up-to-date, accurate and trusted information is at a premium.

But not all publishers share the FT or Thomson’s advantage of operating in a market where there is such an explicit link between the quality of the content being supplied and the potential incremental profits to be made by the content consumers.

Other publications will have a tougher job to do, but one by one they will have to follow the specialist’s example and start to erect barriers around their most valuable property. But in some ways putting up the paywall will be the easy part. Next, publishers are going to have to work very hard to convince users to part with their cash — a tough ask unless the would-be subscriber can be convinced there is an immediate and tangible benefit. Not easy with so much free content available.

And in an age where audience generation lies as much in the hands of the search engines, content aggregators and social networks as it does with the content owners, how can the competing priorities of product marketing and revenue generation be reconciled?

In most cases there will remain a need to promote sampling and more often than not take an incremental approach to the development of the relationship with the user. Such a model might see a certain proportion of content left completely ungated. Access to further content might depend on registration while some other material might only be available to paying subscribers.

Outside of a subscription regime there might be certain premium content or services that requires an additional one-off payment. Meanwhile, access to individual articles in an archive might be subject to a micropayment or a pay-as-you-go system. Another example, such as the one Abacus recently developed for Building and Property Week, might see the user’s level of ‘free’ access being metered to a certain number of transactions in a month before they are required to sign up for a product.

And just as the models to be implemented will be mixed and various it’s equally likely that any model adopted now will need to change — not least as the publisher monitors and responds to user demand.

All of these considerations came into play when leading B2B publisher EMAP Inform decided in Autumn 2009 to move its entire online portfolio, including titles such as Nursing Times and Drapers, to a subscription-based model. 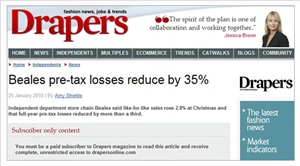 Jeff Leslie is Digital Development Director responsible for the roll-out of pay walls across the EMAP Inform portfolio. He believes a combination factors is essential to success. “We need to ensure that our system can be adapted to suit the exact market circumstances of any product.”

“And we need to be able to adjust the access policies over time, through devices like teasers and free trials, to ensure the optimum balance between attracting new users and potential subscribers and converting these prospects into paying customers.”

“The ability to do this efficiently and without the need for constant technical redevelopment is fundamental to EMAP’s strategy and the number one requirement for our platform. That’s why we’ve invested in Webvision”, says Leslie.